In Feb. this year, I and some other Balsn members participated in Paradigm CTF, an Ethereum-focused security competition held by Paradigm. First of all, thanks to the organizers for preparing such high-quality and impressive challenges! Luckily, our team, whoami, got fourth place with 11 out of 17 challenges solved. 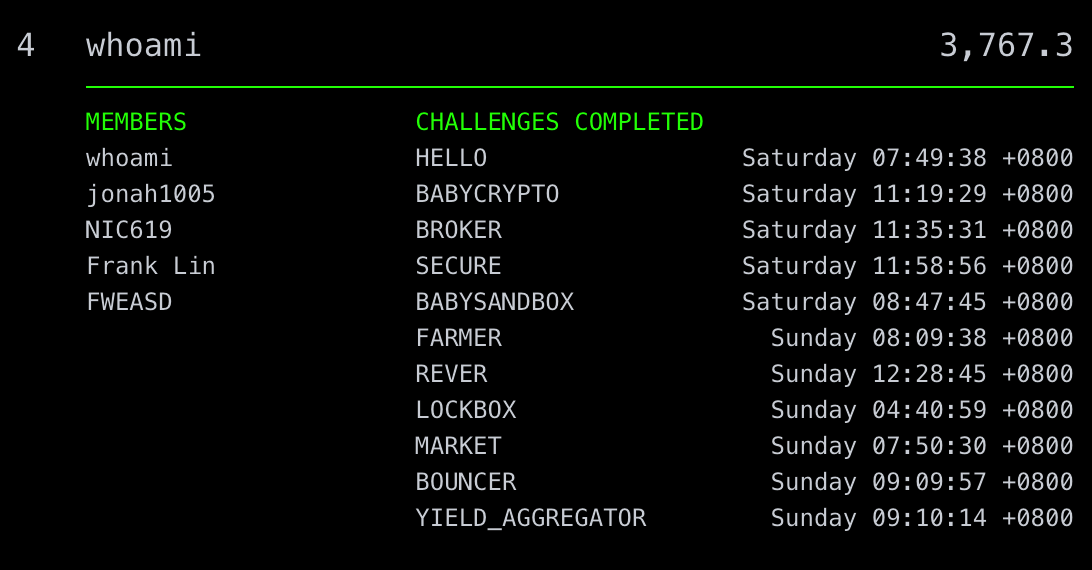 When browsing the official repository, I noticed a clever trick used in a coding challenge, REVER, and wondered whether I could improve the solution furthermore. Here, I will share the optimal solution I can develop and some tips for EVM bytecode golfing.

Writing contracts that can only be used in one direction is so last year.

Overview of the Challenge

The goal of this challenge is to write a contract (i.e., a sequence of EVM bytecodes) that can identify palindromes. Even more complicated, our written contract should work as well when executed in the reverse direction (somehow inspired by the movie TENET).

Both original and reversed versions of our contract are deployed after passing checks on the length and the included opcodes. When we request a flag, the backend judges the two contracts with fixed and randomly generated test cases. Our contract should answer all test cases correctly to get a flag.

By a careful inspection, we may realize that this challenge is a real coding challenge since the possible ways to call external contracts are forbidden. Besides, our contract’s length is limited to a maximum of 100 bytes.

First, let’s take a look at the official solution, which is the compiled bytecode (with the last 3 bytes discarded) from the following code written in Yul:

This code implements a straight-forward byte-by-byte comparison algorithm. Notice that after deploying the two contracts, 1 wei is transferred to both of them to let the return value of selfbalance() become 1. As for callvalue() and returndatasize(), they are always 0 afterwards.

Although the above implementation is good enough to solve this challenge, one may find space to improve by inspecting the EVM bytecode directly (e.g., redundant opcodes, stack elements re-arrangement). Let me show you the optimal solution I can figure out, which is 24 bytes long:

This piece of bytecode consists of 4 parts:

For reference, below is the pseudocode with the same behavior as the bytecode.

Same as the official solution, we should transfer 1 wei to both of the contracts after deploying them. Now, let me explain the tips I used to construct this solution.

The reason for choosing returndatasize() and selfbalance() to replace the constants is that the former is always 0 (before any function calls), and the latter is usually controllable by us. Remember that the balance scale is calculated in wei. Other variables such as chainid() or number() might also be exploited but are less useful in general.

For other frequently-used constants that cannot be presented by an environmental or block variable, push them onto the stack (e.g., PUSH2 0x9453) then duplicate them (e.g., DUP1) whenever using them to save (at least) 1 byte for every additional use.

Use powerful opcodes such as ADDMOD, MULMOD, BYTE to simplify arithmetic operations. For example, to get the first byte of x, use byte(0, x) instead of shr(248, x) to save 1 byte. If there is no need to change the input data, consider pushing it onto the stack by calldataload instead of calldatacopy to the memory and then mload to the stack.

Tip #4: Avoid POP by reusing the old copy of variables

We choose to increase i by one (part 2) before indexing the input data (part 3) to avoid wasting the old copy. In normal cases, the compiler tends to pop out the old copy of a variable after updating it:

However, making use of the old copy would let us save a POP and a DUP:

Instead of explicitly using the REVERT opcode, an execution error in EVM has the same effect of reverting without any data returned. The most common way is by the byte fe, also called the INVALID instruction, which is only 1 byte long. If you want to revert based on a particular condition, use JUMPI to jump to an offset that is not a JUMPDEST to revert. See the 3rd part of the above bytecode as an example.

Actually, I didn’t come up with the above solution during the competition. I used a more complicated way to calculate the numerical difference between the first and second half of the input string, which even has a certain chance of failure.

By the way, there seems to be an easy unintended solution: return a hard-coded answer for the five fixed test cases (determined by the length of the input string), and guess for the randomly generated ones. The probability of success is to be 2^-10, which is feasible to brute-force until success within only hours.